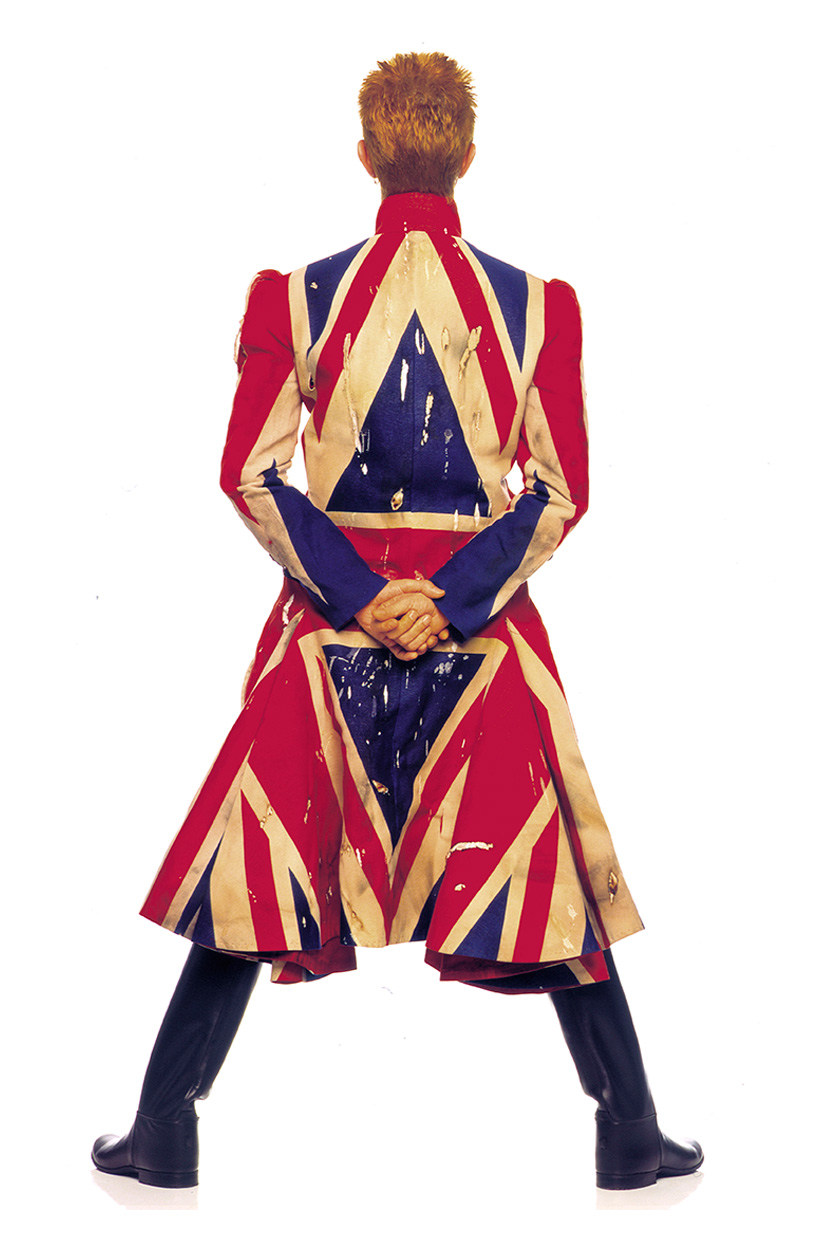 It’s true that London’s Vicor & Albert Museum will stage David Bowie is, a major retrospective of the life and career of one of the most influential performers of modern times. But it’s probably not true that the exhibition may convince David Bowie to end his long period of media seclusion. The singer with the sexiest timbre in rock history is not likely to fly in as guest of honour for the retrospective’s official opening on March 23, 2013. Having become increasingly reclusive since 2004 and haunted by fear of flying, rumour has it that the London-born David Robert Jones refuses to leave New York City. In addition to speculations about Bowie’s retirement from showbiz, the man himself posted a statement on his Facebook page in order to refute rumours that he is committed to co-curating the exhibition. However, Bowie has offered the museum unlimited access to his vast private collection in New York that is believed to comprise 60,000 items. Yet V&A’s Theatre and Performance curators admit they have not even met or spoken to the man, who shaped popular culture like no one else for over forty years.

The exhibiton, which runs from March 23 to July 28, 2013, will feature more than 300 personal items from David Bowie’s incomparable career as musician, actor, writer, illustrator and style icon. It showcases diaries, sketches, handwritten lyrics, album art, films, music videos, photography and some of rock history’s most outrageous costumes. Among them, Kansai Yamamoto’s sculptural and eye-catching striped bodysuit, inspired by the style of Japanese Samurai and Kabuki actors. Bowie first saw Yamamoto’s designs in 1971, but wasn’t able to afford the original pieces at that time. After Ziggy Stardust had become a massive success, Bowie approached Yamamoto and commissioned a set of even more flamboyant stage costumes for the Aladdin Sane tour in 1973.

Beside costumes from his 1920s-influenced the Thin White Duke period during the mid-70s, visitors of David Bowie is will also have an opportunity to marvel at Bowie’s design collaboration with late designer Alexander McQueen. The original, hard-edged Alexander McQueen Union Jack coat, worn by Bowie on the Earthling album sleeve in 1997, adds elements of traditional British fashion craftsmanship – McQueen was trained in men’s tailoring on Savile Row – to iconoclastic and anarchistic punk aesthetics. 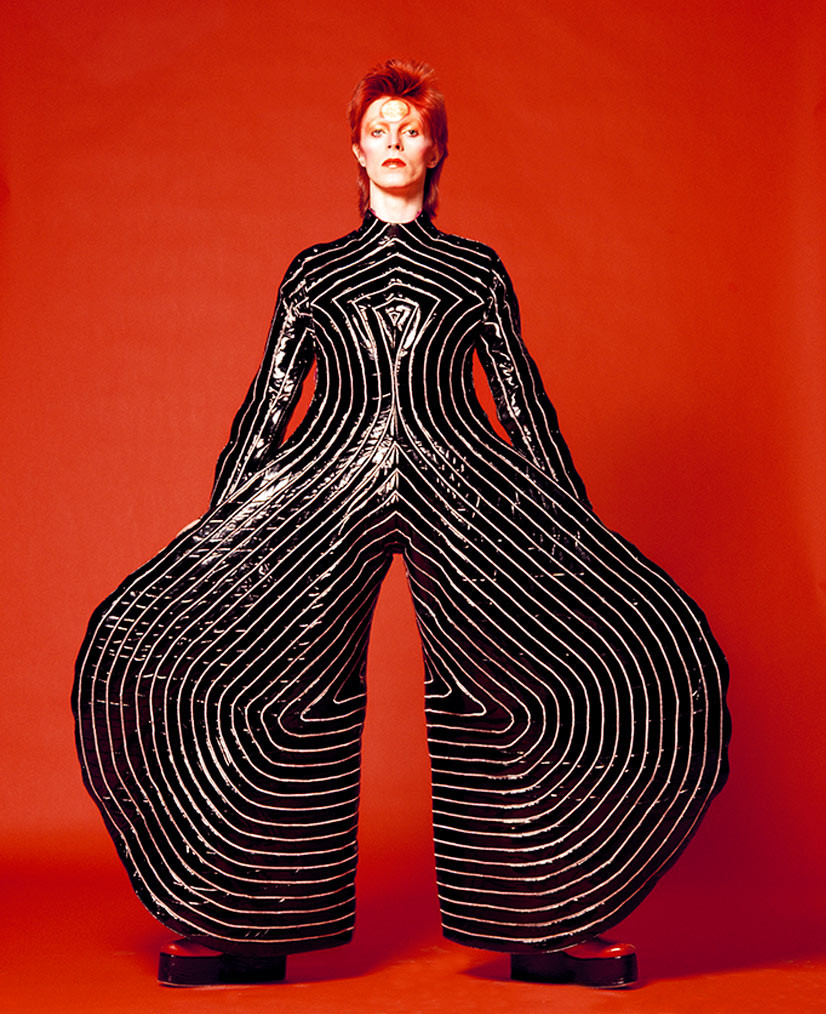 Other memorabilia include Brian Duffy’s contact sheet from a photo shoot for David Bowie’s Aladdin Sane (1973). The album marked the birth of schizophrenic character Aladdin Sane, who was an advancement of Bowie’s space-age persona Ziggy Stardust. Creating one of the most recognisable images in popular culture, the double lightning bolt across Bowie’s face generated controversial discussions about the glitter boy’s flirtation with Nazi mythology (later regretted) and occultism, but has been reproduced in multiple forms ever since.

The exhibition also presents a snapshot by Terry O’Neill (hand-painted by Bowie himself) showing Bowie with writer William S. Burroughs, cut-up and handwritten lyrics for Fame (1975), Heroes (1977) and Ashes to Ashes (1980), sketches and self-portraits from Bowie’s Berlin years, film stills, excerpts from his live performances and films including The Man who Fell to Earth or Labyrinth.

From Ziggy Stardust through Aladdin Sane to the Thin White Duke, from glam rock through plastic soul to art-pop and disco, from The Man who Fell to Earth through Labyrinth to The Hunger, this peerless retrospective exposes David Bowie’s vast talent for transforming himself and testifies that his artistic influence still resonates as much today as it did four decades ago. Without Bowie, there would be no Madonna, no Boy George, no Lady Gaga and no Marilyn Manson.

David Bowie is, hosted in association with Italian fashionistas Gucci, promises to be one of the most spectacular exhibitions in 2013, offering the once-in-a-lifetime opportunity to see over 300 objects of contemporary art that embody the essence of pop to large extent. A must-see not only for any diehard fan of a British legend who changed the face of music and fashion forever. 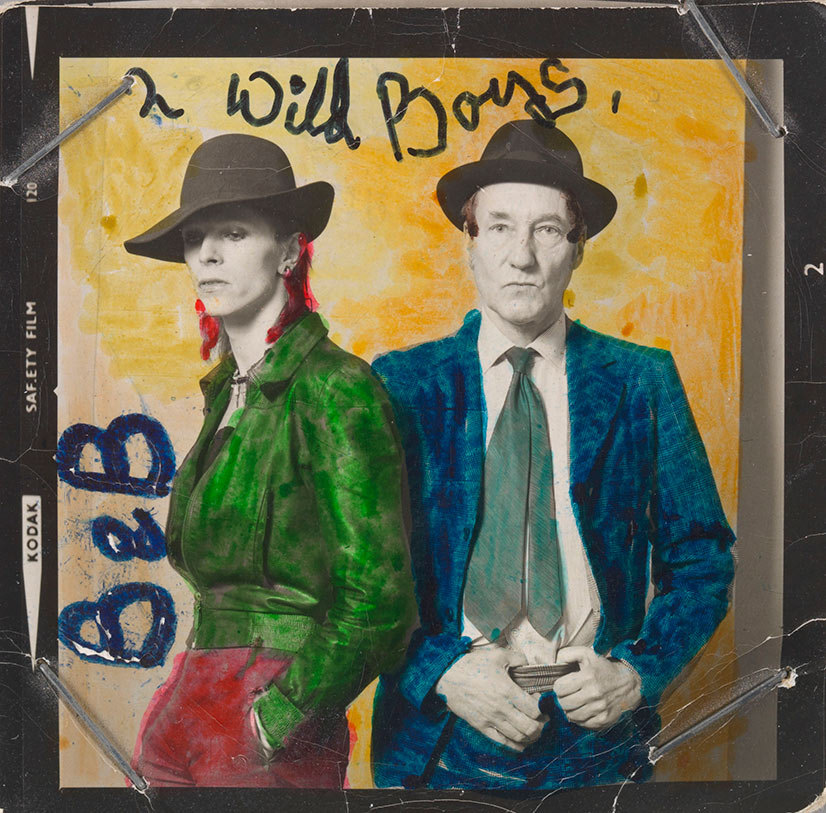