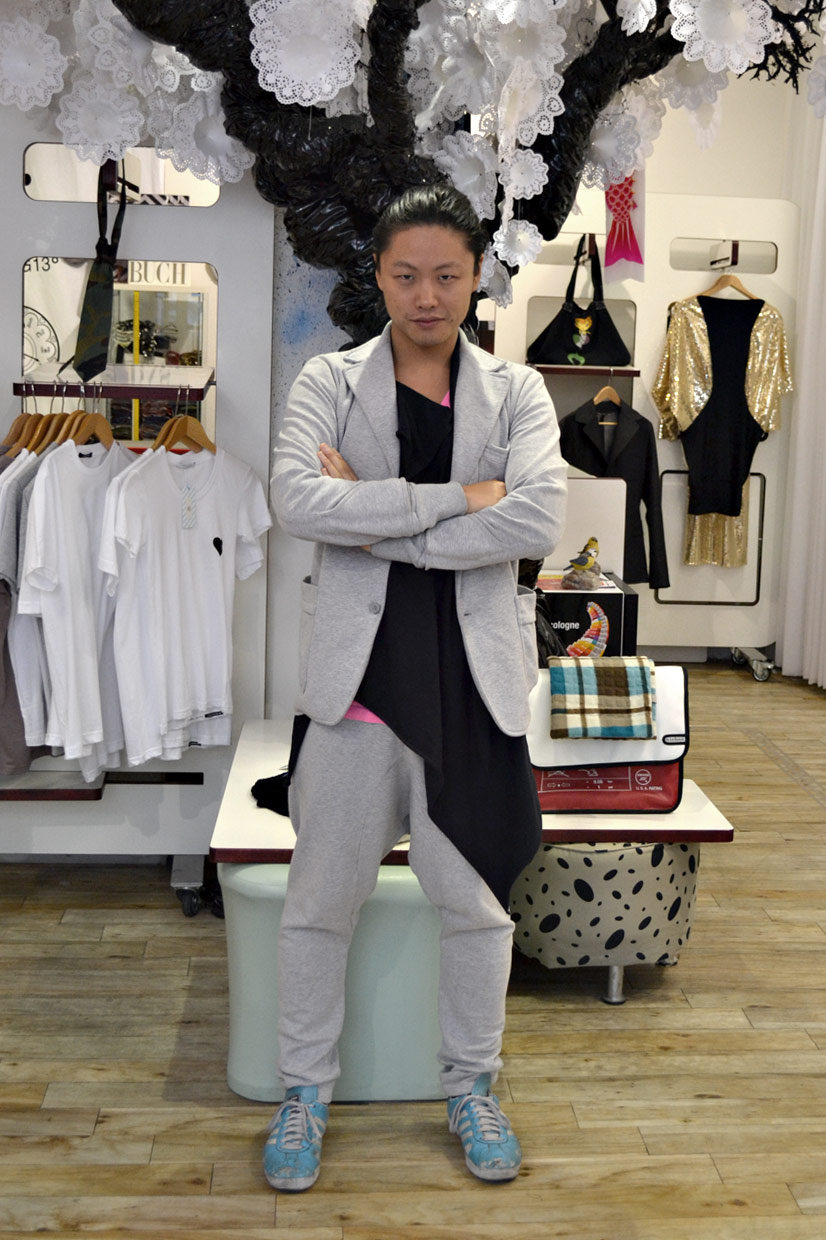 Chang has never gone about things the usual way. Instead, the fashion designer relies on single-minded individualism. Chang’s affinity for clear cuts blends modern minimalism with classic elements, plain colours and geometric shapes. On top of that, Chang’s talents ecceed the skills of a gifted designer and dressmaker by far. If you like to meet an edu-fashionist, dadaist, stylist, performer, educator and ASI-ARTIST in one single person, you’d better read our interview with this independent style advocator or visit Bride Studio Chang13° on Maastrichter Straße in the heart of Cologne’s très chic Quartier Belgique.

Where are you from?
I’m from Seoul, South Korea. My family came to Germany when I was 8 years old. My father got a job in Wolfsburg as a judo coach for the German national Olympic team and kept telling us, we would go back to South Korea soon, which somehow never happened. So I thought it’s better to adapt the fact that I would probably stay longer and take my A-levels at a German grammer school.

Since when have you been living and working in Cologne?
I came to Cologne in 1998, after graduating from Trier University of Applied Siences in fashion design.

Did you enjoy fashion college days?
I was a naive rookie! It was a lot of work but also a lot of fun. I started studying in Trier in 1992, soon I went to Paris where I took lessons in Haute Couture at different fashion houses. I don’t even remember their names, because my teacher took me to a different maison everyday: One day I had to sew on sequins, the other day I did French seams. However, I was overwhelmed by the size of the rooms with hundreds of sewing machines in there – it had that kind of magic air. Following a busy period in Paris, I went to London taking courses in British traditional tailoring. 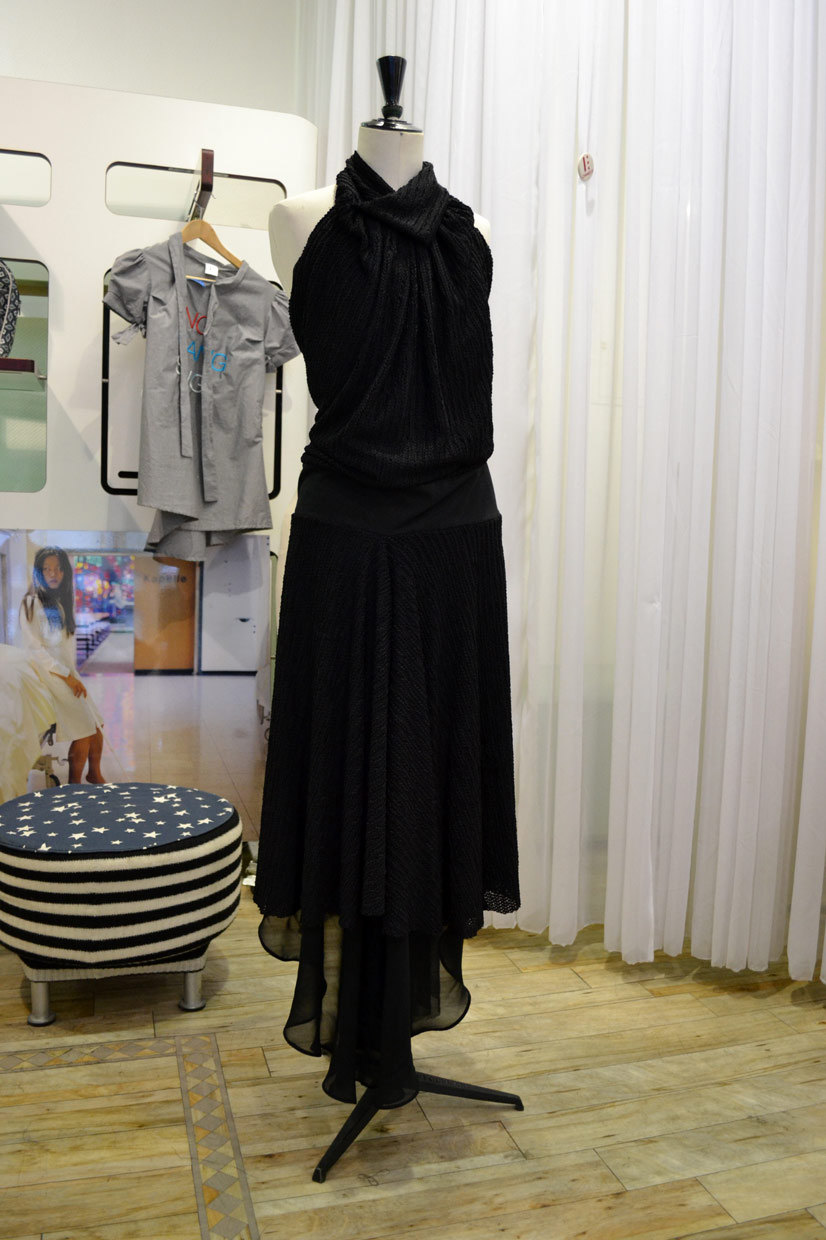 But you returned to Trier to continue studies, didn’t you?
Trier is not what you’d consider very metropolitan, and I always wanted to leave this tiny Roman village. However, I had some great times during those years of study. I used to work as a barman at many different clubs in order to make a living. One of these clubs I worked at was owned by a guy who knew how to throw the best parties. That was the time when house music became really big and we had DJs like George Morel to rock the house. I remember hanging out and partying with Diamond and Pearl, who were dancers with Prince at that time. Some years later, Destiny’s Child performed at the club during a promotional tour and I met Kelly Rowland and Beyoncé Knowles, who were really nice girls.

Which projects did you choose for your diploma?
I was involved in a total of eight projects, one of them focussed on denim that included works for Mustang and Joop Jeans, another one contributed to a collection of Darja Richter. For my major design project, I presented my first collection, that was the Wonderwoman collection. I dreamt of Enie van de Meiklokjes to be my Wondergirl bride, presenting the collection’s wedding gown.

How did you convince Enie van de Meiklokjes to be your Wondergirl bride?
I just asked her, she was a muse for me. Enie accepted my invitation and even was my Wondergirl bride for the fashion show accompanying my diploma.

Can you tell us a bit more about Wonderwoman?
Predominantly, the collection was designed to make women feel comfortable. This concept has become the centerpiece of my work eversince: I can make a woman’s sihouette shine, while she feels completely at ease. You may call it a comfort zone, which has a great impact on self-awareness and outer perception. Whatever her size is, my dresses turn a woman into a queen, a goddess – a Wonderwoman. And when that Wonderwoman enters the centre of attention, she finds many new fans and not enemies, because my pieces don’t generate female rivalry at all. In the end, fashion has a lot to do with psychology. 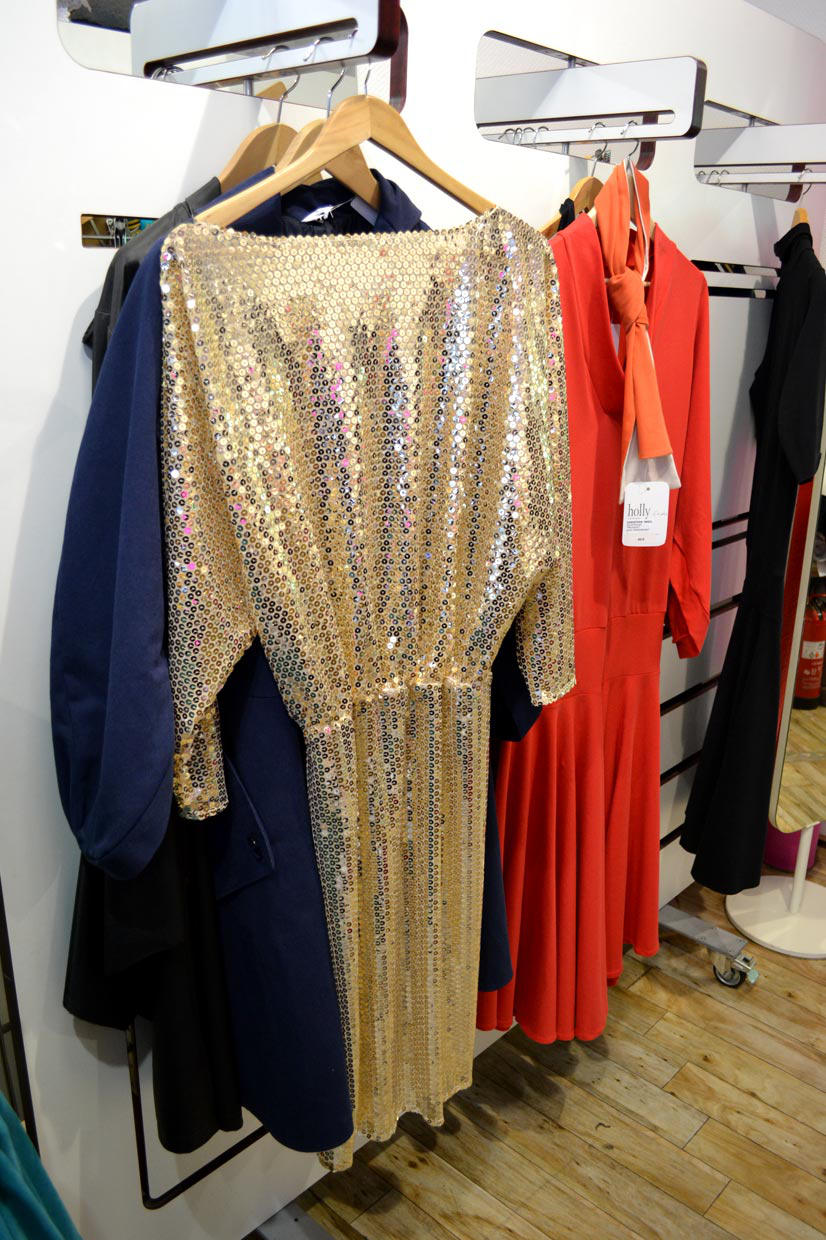 Describe your personal style as a dressmaker, please.
My personal aim as a designer is to create wearable fashion which combines classic elements with components of minimalism and avant-garde. I like plain colours on flowing fabrics that consist of various geometric forms. I love clear cuts and technical precision. Although my dresses are composed of numerous niceties, I’m always bent on tweaking the art of omission.

You worked for 4711, the local renowed manufacturer of Eau de Cologne …
Quite an interesting project, because the company granted me full-blown artistic freedom. In addition to original Eau de Cologne, 4711 sells turquoise and golden silk scarfs with prints of the brand’s traditional CI and logo, which is surely known to millions of people. I reprocessed the scarfs into various pieces of clothing like dresses or knee-high boots, supplying them with my own artistic thumbprint. All these garments were presented at a fashion show. I really loved the idea of creating something completely new from the brand’s well-known CI.

Who are your favourite designers?
I admire all designers with a specific concept and history. Well, there are many excellent designers, for example Jean Paul Gaultier, John Galliano, Yves Saint Laurent or Vivienne Westwood. Other designers I like are Jeremy Scott, Miuccia Prada and Tom Ford, they have always followed a consistent style. 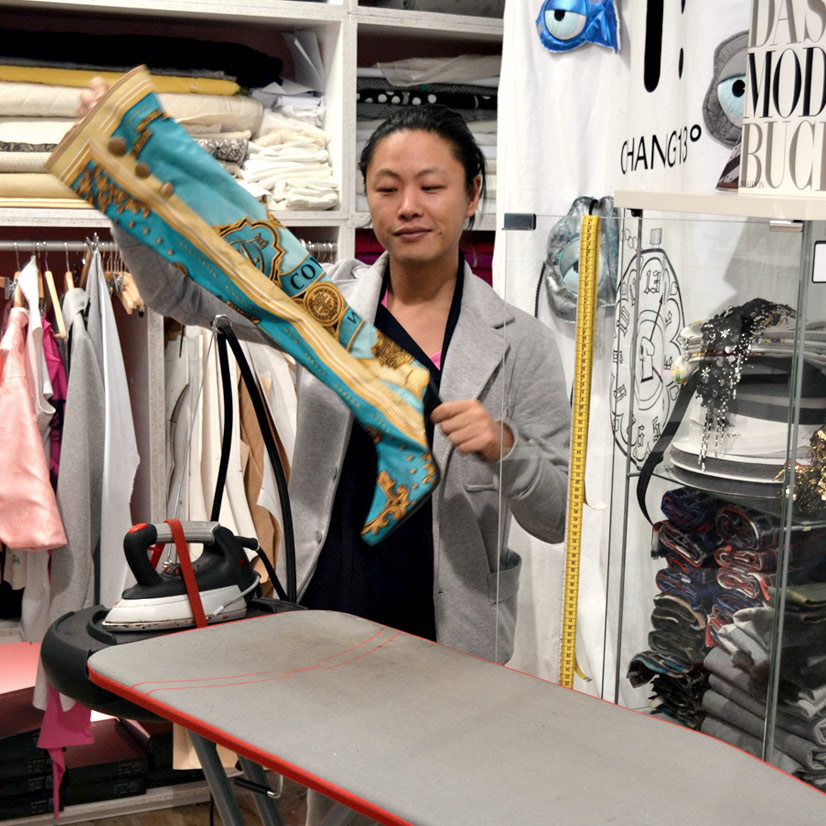 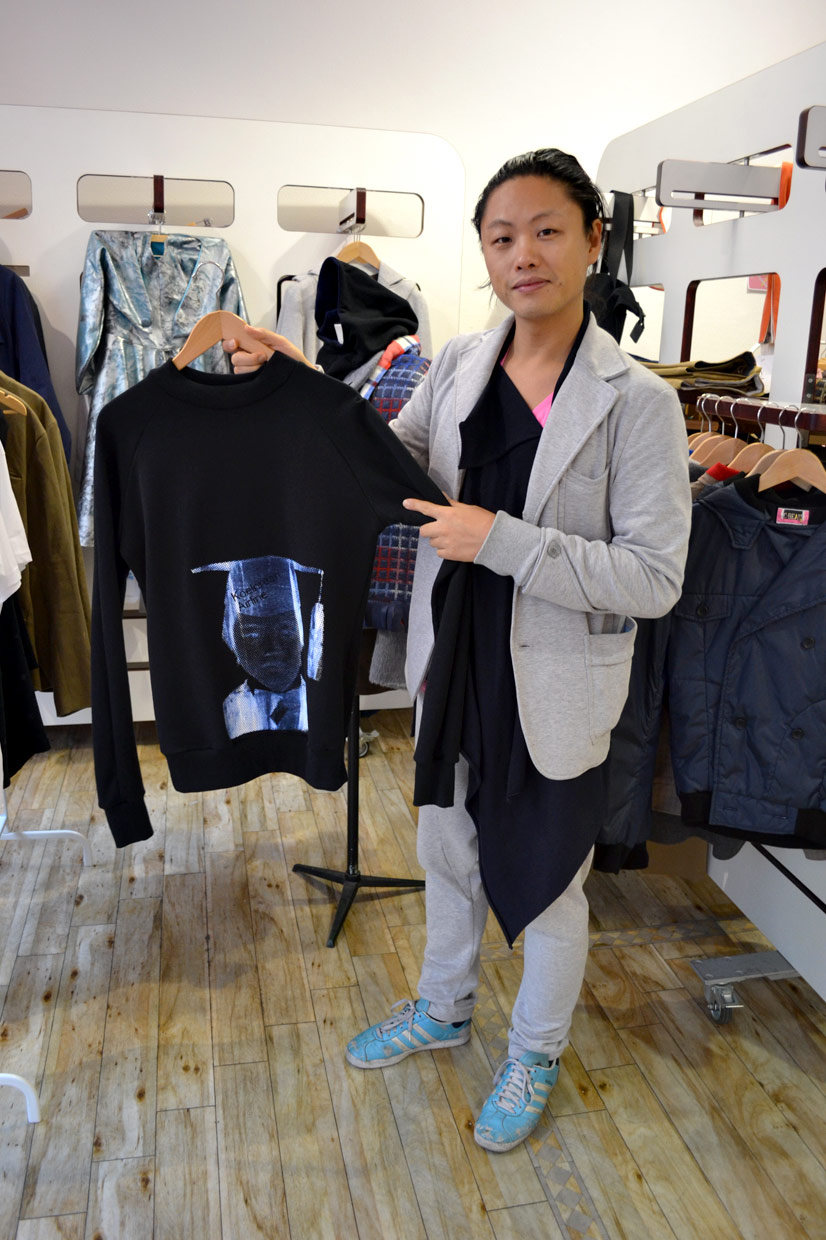 Let’s speak about music. You will soon release your first single, right?!
Yes, that’s right. Arbeitsamtu is the debut single by Gi-Shin Mission Changdarc and features an electro, a dubstep, a jungle and a hybrid electro-dubstep version. Gi-Shin, who is a dubstep producer, created the music and Changdarc, that is me, enriches the German track with his Korean dada vocal constructions. The track was inspired by the mash-up movement, blending two or more pre-recorded songs into a new track. We simply call it bastard-mash-up. The download release of Gi-Shin Mission Changdarc’s debut track is on April 20.

It’s quite difficult to find one valid description for the things you do, then.
Primarily, I consider myself as an edu-fashionist: I’m a fashion designer, but I’m also an educator holding classes in drawing and design. Due to many other projects that I’m comitted to, I would describe myself as a stylist, performer, dadaist and ASI-ARTIST. Of course, I’m also a great philosopher, spreading wisdom as Changfuzius.

What made you stay in Cologne?
Well, it’s the liberal atmosphere that I like about Cologne. The city provides a convenient environment for fashion, art and cultural diversity. Somehow I got stuck in Cologne, which is no longer a stopover for me but the hub of my life.

Are there any other cities you like?
I’ve been to many cities, and I’m fine with London and New York. Wheras people in New York are really friendly, the city itself is rather synthetic. New York is a perfect stage play. People in London are very polite and natural. London offers a great fashion background that is unmissable for its unpredictable eccentricity. But if you ask me for my favourite city, I’d always say Paris. It’s the invincable mixture of art, fashion and music that I adore. Paris stages its own flawless drama. I love the attitude that if you’re not able to afford a luxury dinner, you’re at least able to have glas of champagne everyday, which is quite normal in Paris. 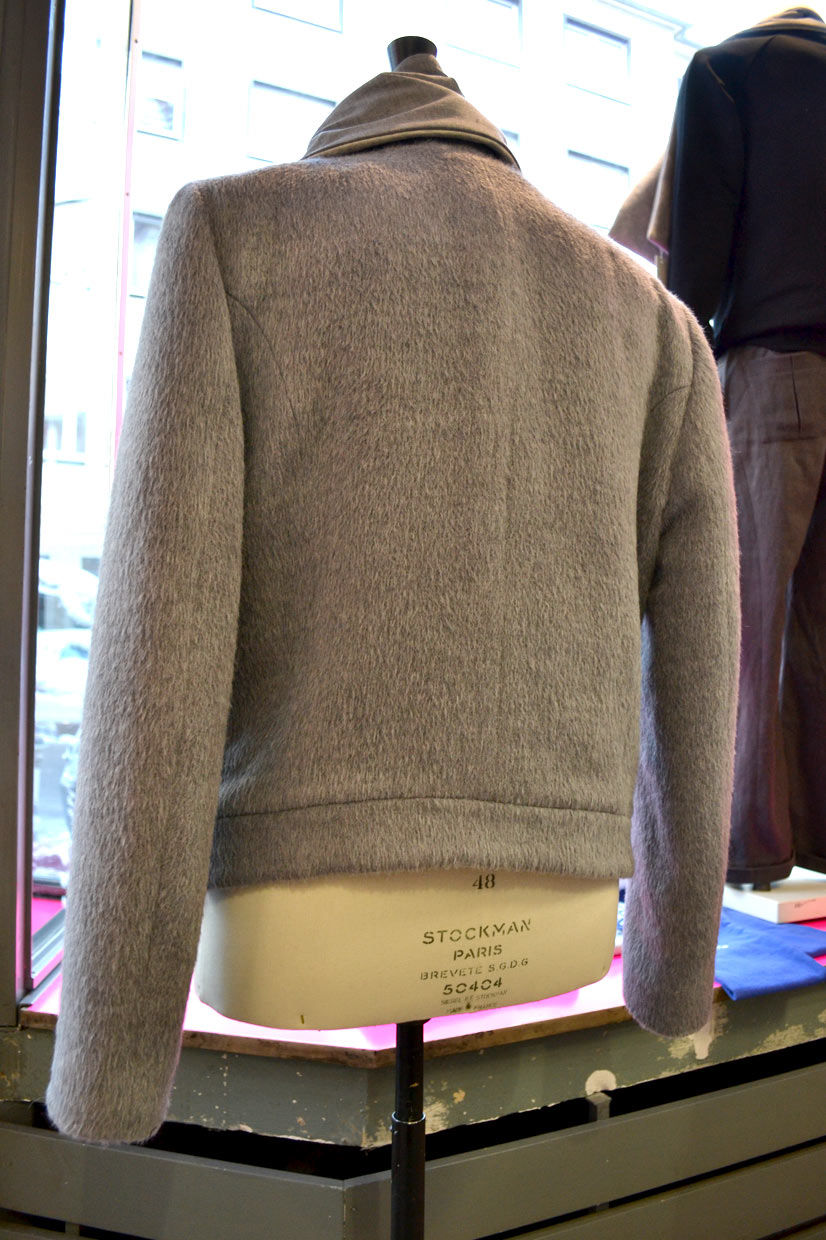